Create STUNNING Music On The Piano

Should You Practice Contrary Motion Scales?

Is the Circle of 5ths Useless?

Here's why it exists -- but is it useful for you?

Once you start learning and studying music a little bit you're bound to come across the Circle of 5ths.

It sounds so official and important.

THE CIRCLE OF 5THS.

And it can be daunting or confusing if you don't know what it is -- or WHY it exists.

It will be up to YOU to decide whether you think it's something that can be useful for you.

I know many pianists who never use the Circle of 5ths. For them, it's not super helpful or applicable to their practice or playing.

The Circle is great at showing patterns which helps make it easier to learn and remember.

How does it do this?

The Circle of 5ths 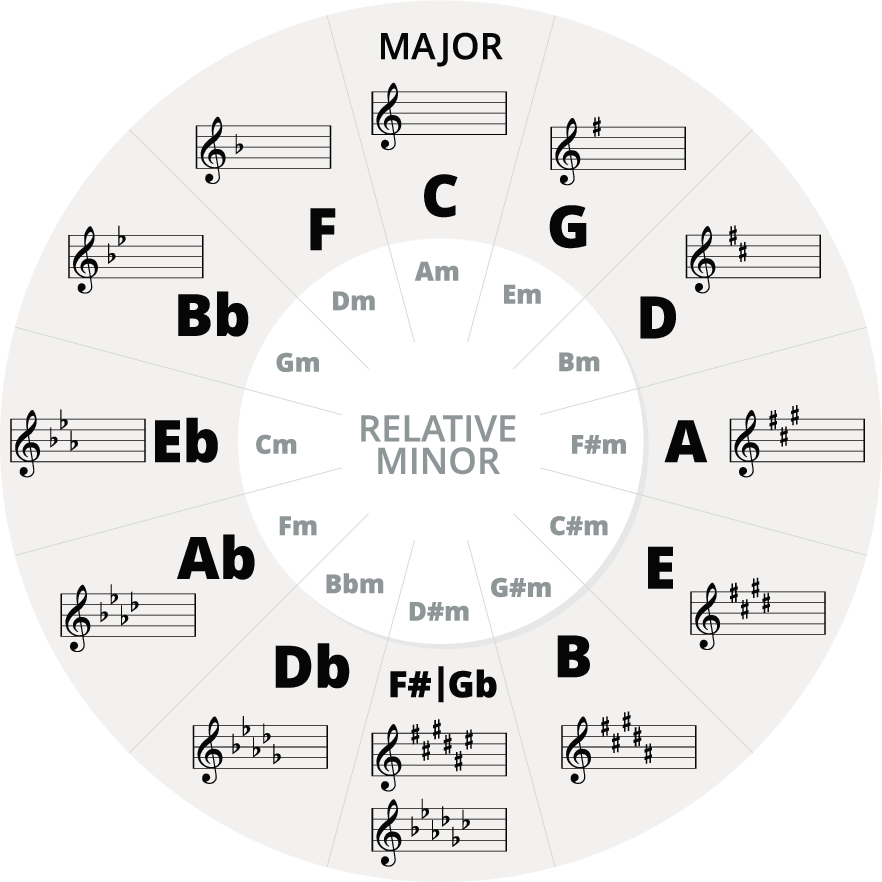 Now, this can be a lot to take in, so we'll take it slowly. Start at the top - C major. Everybody loves C major.

The first thing to notice is that if you move around the circle in a clockwise direction (to the right), everything moves in an interval of a 5th. C to G is a 5th. G to D is a 5th and so on.

That's why it's called the Circle of 5ths!

Do you see the pattern here?

So a big use for the Circle of 5ths is to help you learn which key signatures have sharps and flats, and how many sharps or flats they have.

The Circle of 5ths can also show you the ORDER of the sharps and flats.

Let's start with the order of sharps

Look at the Circle again:

Now look at the circle and find F. Do you see what's just to the right of it? C!

Now let's move to the next key after D. That's A major. Can you guess what sharps A major has?

The order of the sharps in key signatures is shown by the Circle of 5ths.

You can follow this pattern all the way around to the bottom of the circle. That's where things get messy and confusing.

I like to think of the bottom of the Circle as the Twilight Zone -- because there are keys that can be either sharps or flats -- depending on how you want to think of them.

Now, you COULD keep going around clockwise -- but what I (and most people) like to do is go back to the top and re-start -- this time going counter-clockwise.

So that's what we're going to do.

The order of flats

Back at top with C, let's see the Circle one more time:

Instead of going right, we are going to go left. You may realize that the intervals have changed now. C to F is not a 5th, it's a 4th.

That's the reason why this can also be called the Circle of 4ths. But here's something cool...

While C to F is a 4th, F to C is a 5th. So you can think of it as going UP a 4th, or DOWN a 5th. That's a really neat thing about music intervals. 4ths and 5ths are mirror-images of each other!

So moving left from C lands you on F. And now you're moving to the side of the Circle where the keys have FLATS instead of sharps.

But the patterns are very similar.

Moving another key to the left and you land on Bb major, which has TWO flats.

You know where this is going...

Moving counter-clockwise will tell you the order of flats.

Well ... not much honestly.

Personally I have found it really useful to learn the major and minor keys and their key signatures. I find it helps to learn the Circle of 5ths while you’re sitting at the piano, so you can visualize things as you learn them.

But what about you? Now that you know how the Circle is built and how to read it, do you think it's helpful?

Or is the Circle of 5ths useless?

#How To Use The Circle Of 5ths