What are diatonic chords? They sound fancy, don’t they? Well, not exactly! In a nutshell…

Diatonic chords are chords built on the notes of a particular scale.

The concept behind this is quite simple once you understand a few basic things about music theory. This article will explain in detail what diatonic chords are, how they work, and why they’re an important concept for all piano players.

If you like watching more than reading, check out the video above. If you want a deeper dive into theory, keep reading!

1. Degrees of the Scale

To understand diatonic chords, we first have to understand scales. Scales are a sequence of notes organized by pitch. Often, a formula or set of rules determine how the notes are ordered. You can learn more about building scales in this lesson.

These are the notes to the C Major scale:

Now, let’s assign a number to each note. C is the first note of the C Major scale, D is the second note, and so on. You might hear these numbers being referred to as degrees of the scale.

If you want to get really fancy, music theory experts have special names for each degree of the scale:

Don’t worry too much about these terms for now. You may, however, run into them at some point — like when learning dominant 7th chords. 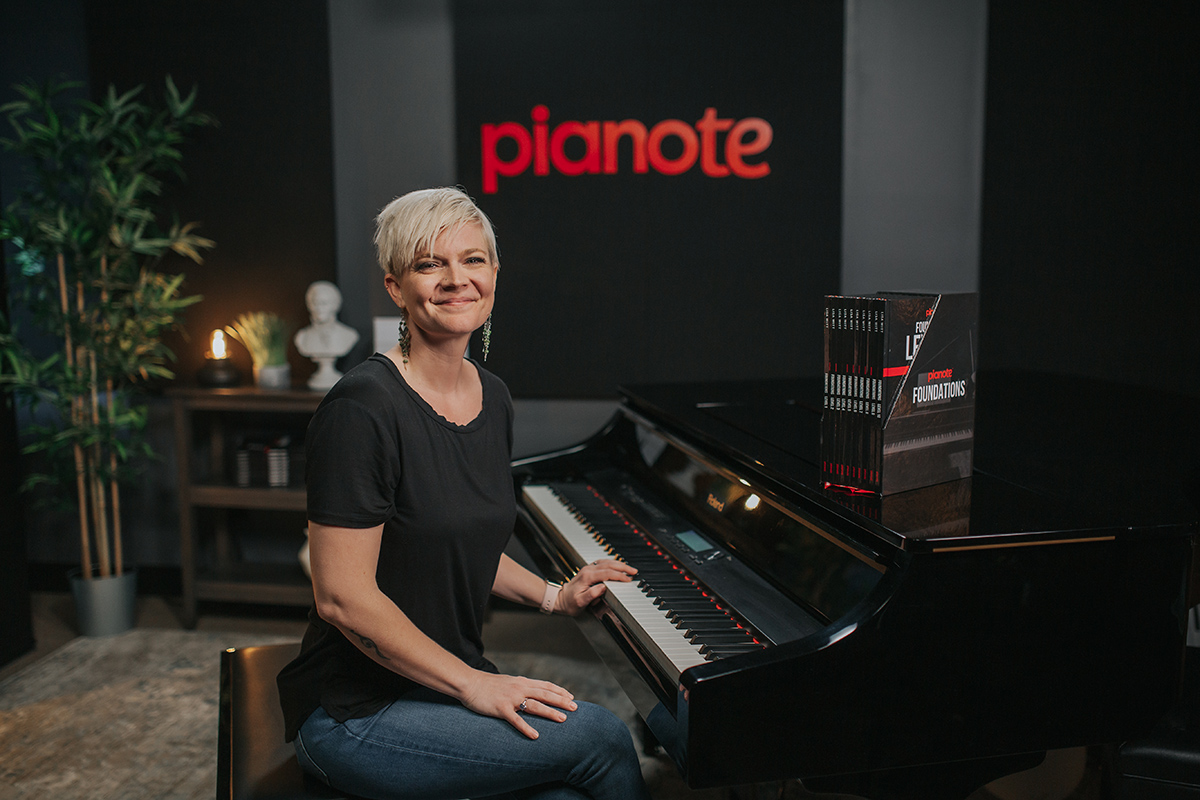 Understanding how chords work will give you a BIG leg up in learning how to play the piano. Knowing just a handful of chords will unlock hundreds, if not thousands of pop songs. To get started today, check out our free Chord Hacks course, or read How to Play Piano Chords: Triads, 7ths, Chord Extensions and More.

2. How to Build Diatonic Chords

Building diatonic triads is a simple matter of stacking triads (three-note chords) on top of each degree of the scale:

You can easily find all these chords on your piano by playing the triad claw-shape on every note of the C Major scale. Like this:

And here are the notes written out:

Try this yourself: play the C Major scale, then play the claw-shaped triad on top of every note. You’ll notice that some chords sound “happy” and some chords sound “sad.” This is because some diatonic chords are major chords and others are minor chords.

Interestingly, in all major scales, certain diatonic chords will always be major or minor. There’s a way to visualize this, which we’ll cover shortly in the number system section.

But first, let’s quickly run over how to build triads on a scale with more sharps and flats. Like D Major.

3. How to Build Diatonic Chords in Other Keys

Building diatonic chords in other keys is the same process as building them in C Major: go through each degree of the scale and play the triad claw shape on top.

The only difference is, you need to watch out for what notes to sharp or flat.

So, if you’re working with D Major, which has two sharps (F# and C#), each time you run into F or C, sharp them.

Dive deeper into the number system: The Nashville Number System: A Beginner’s Guide

The number system allows you to quickly visualize whether a diatonic chord is major, minor, or something else.

Here’s how we represent the diatonic chords of the major scale using Roman numerals:

❗💡 BONUS: What’s that circle symbol? The “o” in chord vii means it is a diminished chord. A diminished triad is a stack of minor thirds. This is in contrast to a minor triad, which contains a major third stacked on top of a minor third.

Why use the numbering system?

The numbering system may make music look more like math than art, but trust us, there’s a reason we use it!

Numbers allow musicians to seamlessly transpose a song from one key to another. Imagine this chord progression:

This is a common progression in C major, but how do you play this in, say, G major?

Well, if we visualize each chord as a diatonic chord built on a scale degree…

…we can substitute G major chords based on these numbers!

5. How to Use Diatonic Chords

So…what’s the point to all this theory?! Good question!

What chords sound good with this song?!

If you know all the diatonic chords of a key, you’ll know what chords will sound good in that key! This opens up many possibilities for chording, songwriting, and improvising.

Knowing these chords will also give you a head start in figuring out the chords of a song. Say you’re trying to figure out the chords to a song in D Major by ear. By writing or playing out all the diatonic chords in D Major, you can narrow down which chords will show up in your song.

Charmaine Li is a Vancouver writer who has played piano for over 20 years. She holds an Associate diploma (ARCT) from the Royal Conservatory of Music and loves writing about the ways in which music—and music learning—affects the human experience. Charmaine manages The Note.